Join us on our Trail ride on April 24, 2022 to celebrate Virginia 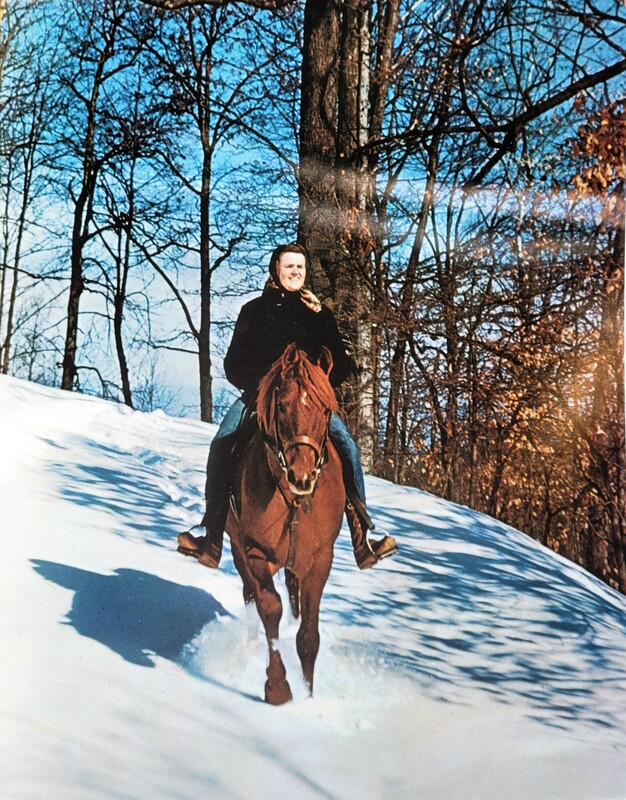 With incredible sadness we wanted to let you know that Virginia Kelsall passed away on November 1.
Our Leading Lady, Queen, Mentor, Energizer Bunny and dear friend will be sorely missed. She is with her husband, family, friends, and beloved horses, cows and pets now. She was 91. No services are planned because she didn't want any, but SE and PAHA will be planning a memorial for Virginia and will let you know when we do.

One Person can make a difference!

I knew Virginia for over 50 years.  I firmly believe that she is the main reason that the Arabian horse became a major part of my life for this same period.

Jean Phillos introduced me to Virginia less than six months after Virginia’s husband, Arthur. died in a tragic automobile accident.  I purchased my first Arabian from her in 1971.  Patrician Alamat, a very nice colt, by her grand stallion, Al-Marah Rapid, who was bred by R. B. Field.  That was the beginning of our long and eventful relationship!


Virginia introduced me to pedigrees and how to do research in the Stud Books.  She helped me lease my first mare from Bazy Tankersly.  She introduced me to the Pennsylvania Arabian Horse Association and specifically the Southeast District.  She persuaded me to become a director of Southeast as well as become a long term volunteer supporting numbers of Southeast events, including the Cheshire Competitive ride, the East Coast Show and the Judged Pleasure Ride.

She introduced me to ECAHS and encouraged me to become involved, become a board member and work for this organization along with her.  We have also traveled extensively on many horses adventures.

I am sure many people can relate to my experience with Virginia.  I am only one of hundreds of people who have been influenced by her over a lifetime.  Virginia dedicated her life to the Arabian horse, AHA, Region 15, Pennsylvania Arabian Horse Association and the Eastern Crabbet Arabian Horse Society for over 77 years.  Her first foal crop was in 1955.

No matter how much work you do on behalf of the Arabian horse or any organization, I always feel my efforts are part time, whereas the Arabian horse has been a full time passion and labor of love for Virginia.  Her family and the Arabian Horse were what made Virginia the person she was.

Don’t ever believe that a single person cannot make a difference.  Virginia made a difference in many peoples’ lives.  The glass was always half full, no setback could not be overcome, she was the consummate optimist.

I will miss her and suffer from her absence in my life.  Many, many people in her community and the Arabian Horse World will also feel this same loss.

William Noonan
True Blue Arabians
I suppose we would refer to Virginia Kelsall as an Influencer now. My first encounter with Virginia was in the 6th or 7th grade (~1970) when she was the substitute teacher for my class at Unionville. I learned a large handful of life lessons that day that resonate even now, and for which I am grateful and very sentimental in this telling. Virginia had a reputation that preceded her among my classmates as no-nonsense, but it seemed that it would need to be tested that school day. As the class demonstrated its delight with our regular teacher’s absence by yammering and not attending to what Virginia assigned, I watched her handle it by staring down every individual who was not quiet or engaged. She didn’t leave the teacher’s desk, such was the power of silence and focus and soon you could hear a pin drop. As she walked among our desks after a while, checking on our assignment (whatever it was), she stopped at my desk and saw that I was drawing horses. She set right to informing me about her Arabian horses and to come by Patrician Arabians anytime. That an austere teaching persona could be the outward demeanor of an enthusiastic horse lover awakened the prerogative to bypass reputations and to inquire in order to understand someone. After that I looked forward to her subbing every time someone on the regular teaching staff sneezed and I invested time learning about Al Marah Rapid, Azron and Arabs of all sorts.
Toward the end of High School I went to work for Gayle & Roger Legg on their Highland Eyrie farm. It is twice the heartbreak to lose them both this year, and it was indeed Virginia who informed me of Gayle’s passing. Gayle bred their Buckskin draft mare, Moose, to Rapid each year for a while and my parents bought the 1977 filly “Highland Gazelle” as my graduation present. “Zelda” ( 1977 - 2009) was my first ‘warmblood’. So it was ‘horse family’ to see Virginia off & on for a couple of years, when everything was live-cover each Spring. Before heading to college in 1979 I was able to help the Legg’s in their effort with Arabian racing at Delaware Park, another tangent to Virginia’s legacy. Humorously, Moose was an outrider’s mount at the early Arabian races organized on the local exercise tracks off Newark Road & at Fair Hill.
I lost touch with Virginia for few decades but we reconnected through school district associations and the Cheshire/Southeast PAHA rides. We picked up where we left off and I was heart-warmed and welcomed all over again by the steadfast, intelligent characteristics she possessed. In these last years I grew to appreciate her clarity and direct, dedicated manner – she spoke to what was needed and asked unabashed for your help out right. She did so with admirable grace and a profound sense of purpose that will be missed by many.


Debra Barber
I did Cheshire many times with my Morgan mare and when she learned I rode the trails all the time due to living and boarding near by she tapped me to mark part of the tail each year but after I bought my Arab I really got to know her… after finding out she called me and had me bring his papers to her house and boy did I learn about his background of course she was excited to see I had a Crabbet which I had no idea what that was but sure learned … each year in April I knew I would get the call about marking trails which I did till moving my horse to far and not having a trailer … and when I started working at New Bolton she would get me thinking about vet judges and the meetings we held there …
Michelle Stevens
Virginia was an amazing person. She personally brought my daughter’s ribbon to my house the first time that I met her. She remembered me every year that I came to the judges trail ride and took such of an interest in my daughter. I will miss her, she was an inspiration.